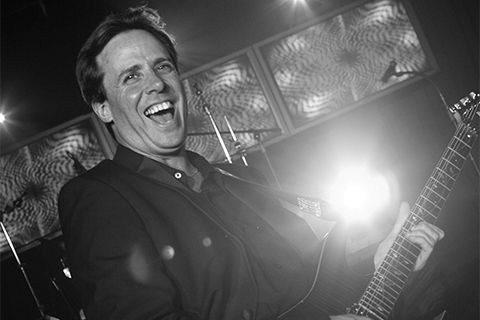 Kenny Ford has been leading his own Kenny Ford Band for the past 15 years receiving client accolades all along the way. Kenny’s approach is that he treats each party as if he were playing for a close personal friend. The results speak for themselves. Today, the Kenny Ford Band is one of the busiest on the Hank Lane Music roster playing a wide of musical styles and his signature crowd pleasing dance floor sing-a-long classics from Queen to Blink 182.

The youngest of four children from Long Island, New York, Kenny Ford was born into a musical family. By the age of three, Kenny was already sitting at the piano figuring out melodies by ear of songs he had heard around the house. People have asked his parents and siblings if they forced him to practice piano, as is the case with many other young children. "Actually," recalls his sister Joy, "We had to drag him away! He'd be down there at 6:00 AM banging away and waking up the whole house!" It became apparent that music was his destiny. Kenny furthered his studies in music attending the prestigious Berklee College of Music in Boston, MA, where he completed his Bachelor of Music.

To See Videos on the Kenny Ford Band, Schedule an Appointment Today!

Kenny Ford Band Review from the Parents of the Bride: "Sensational!"

Please forgive the delay in writing you, as I was catapulted back to work! I did not want too much time to go by before telling you and the Kenny Ford Band how absolutely thrilled we were with the music they provided, NON-STOP, throughout our daughter’s wedding (Michelle and Adam) at Temple Emanuel in Closter, NJ. Guests are still talking about the band. It was truly sensational and well beyond our expectations! We have quite a few friends who are musicians and they gave the band the highest kudos. People danced through the breaks, people danced to the bitter end. The Kenny Ford Band is to be credited with playing a major role in making this a most memorable wedding. Thank you! Thank you!

Nina and Eric, parents of the bride

Marisa and I just wanted to quickly thank you two (and Hank Lane, in general) for everything. You two, specifically, were super professional, always available, and enjoyable to work with – we couldn’t have asked for more.

Please send our thanks (again) to the Kenny Ford Band. They were ABSOLUTELY AMAZING. Everyone is still talking about them and telling us how well they were (as if we didn’t know). A lot of people, independently of each other, actually told us that they thought we had a DJ because of how on-point they were with every single note, across all genres of songs. Although we had very high expectations going into it, they managed to somehow shatter them. We really don’t have any words to say about them, except they were the best we have ever heard. Without question.

Finally, to the Hank Lane Company, in general, we also want to say thanks. If you two and the Kenny Ford Band are representative of the organization as a whole, it surely must be the best in the area. We visited with several different music groups/companies and never once did we second guess our decision to work with you…even till now, after the wedding. We have been and will continue to tell all of our friends and family (most of whom have been asking us anyway) to choose Hank Lane.

Thank you again for making our evening so special and AWESOME.

We loved working with Hank Lane for our wedding!! We used the Kenny Ford Band - they were incredible!!! They kept the party going all night. When the wedding was over, our dance floor was still packed and people did not want to leave!! Leading up to the wedding, they were super easy to work with and extremely responsive over email. I would book them again and again!!!

Kenny Ford Band Review: "Knocked it out of the park...crushed it!!!"

I will send a formal thank you once we order our cards but we just wanted to thank you and let you know that Kenny Ford absolutely knocked it out of the park, seriously crushed it!!! They were so beyond fabulous and everybody keeps talking about the band and how amazing all the music was. They played all the songs we wanted, plus more, and the singers who joined on the dance floor and interacted with everyone made it even better. The dance floor was packed all night, everyone was singing along and going nuts!!! I can’t stop talking about how perfect it all was. Thank you again for making our wedding day the best!!!!

I just wanted to give you some feedback on the band last night not only was there music incredible but their personalities to match! Every single person at the party agreed they were by far the greatest band they have ever heard. I am so incredibly pleased with them and I truly appreciate it! We will be using them over and over again in our family. There are 13 grandchildren that have some big parties when they are 13 that we will be using them for! Thank you so much. 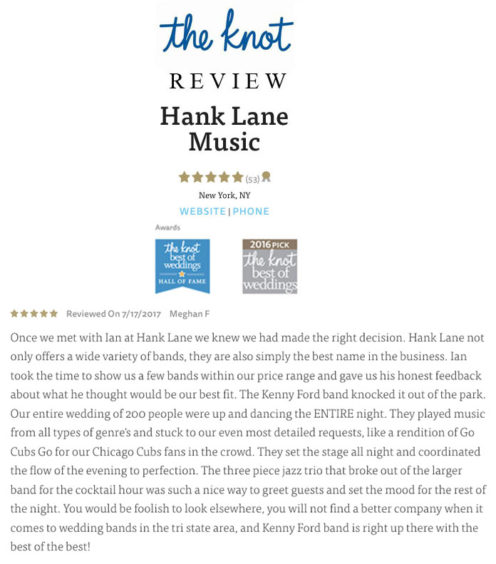 "They played music from all types of genre's and stuck to our even most detailed requests, like a rendition of Go Cubs Go for our Chicago Clubs fans in the crowd. They set the stage all night and coordinated the flow of the evening to perfection." 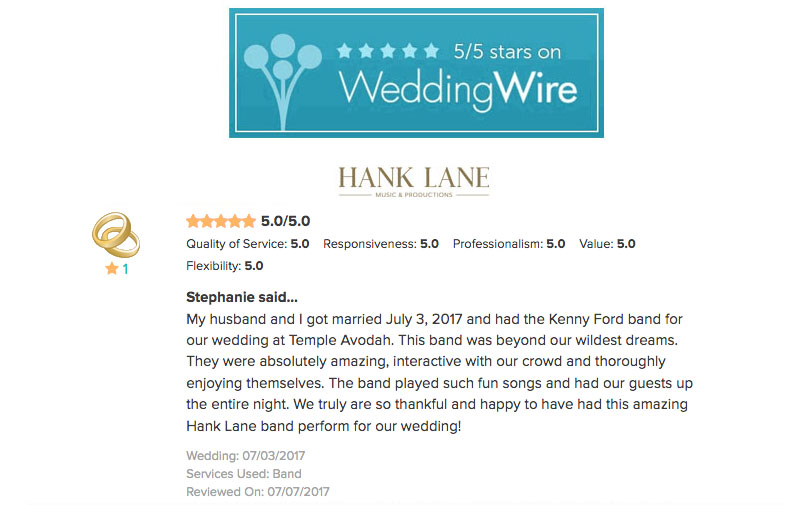 "My husband I got married July 3, 2017 and had the Kenny Ford band for our wedding at Temple Avodah. This band was beyond our wildest dreams. They were absolutely amazing, interactive with our crowd and thoroughly enjoying themselves. The band played such fun songs and had our guests up the entire night. We truly are so thankful and happy to have had this amazing Hank Lane band perform for our wedding!"

Hi Mike, Thank you so much for being so great throughout the entire band process. You were so responsive and really listened to everything I wanted. Kenny Ford was absolutely unbelievable last night -- we got tons of comments about how great the band was. It was the biggest party ever with such high energy the whole night. People couldn't get off the dance floor! It was my dream wedding and the band really made everything come to life. Thank you for everything! All the best, Hilary 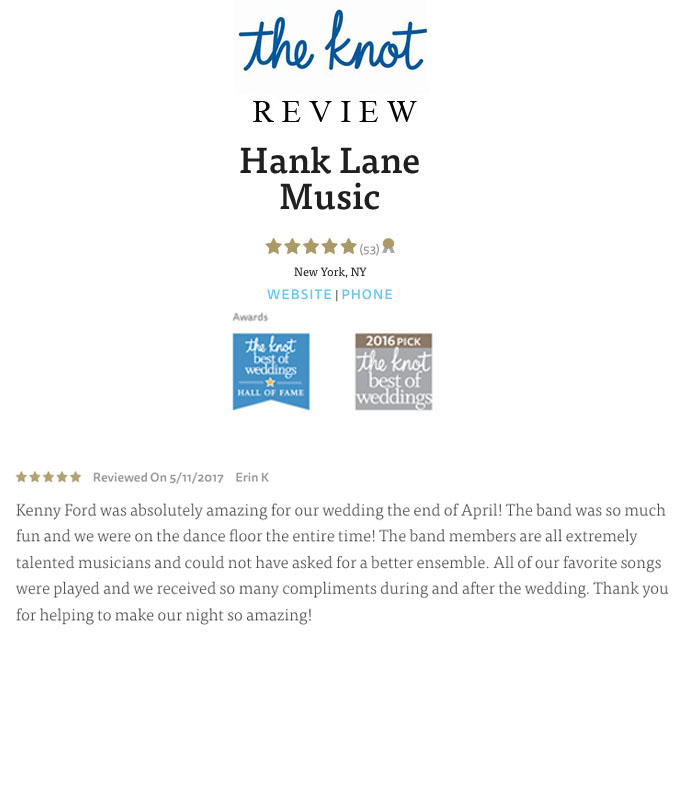 "Kenny Ford was absolutely amazing for our wedding [at] the end of April! The band was so much fun and we were on the dance floor the entire time! The band members are all extremely talented musicians and could not have asked for a better ensemble. All of our favorite songs were played and we received so many compliments during and after the wedding. Thank you for helping to make our night so amazing!"

Dear Kim and Danielle, Will you please tell Kenny Ford and the members of his band that they provided great entertainment at our wedding. You may recall us telling you that we don't dance, but they had us out on the dance floor. The music was amazing -- especially their singing of "At Last" and "Uptown Funk." The music was fantastic making for a very fun reception. Everyone had a great time! Thank you, Lisa and Jon