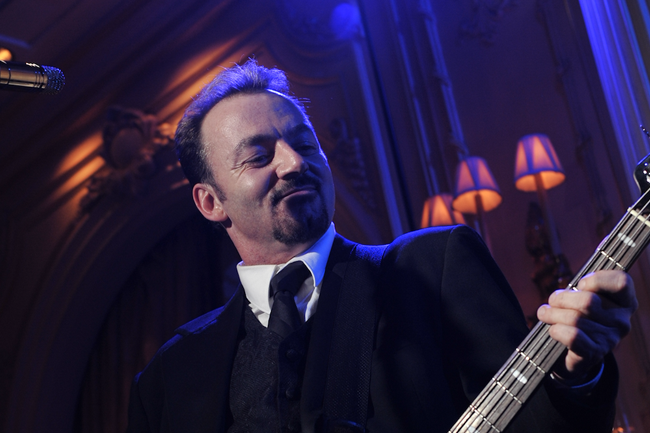 As the leader Hank Lane Music’s popular Russ Bennett Band, Russ Bennett performs at over 150 live engagements per year. Russ has been on the road to establishing himself as a career-oriented musician and singer/songwriter since the early days of his teens. All of this experience has only added to Russ’s skills on the Hank Lane team as a partner of the company’s New Jersey operation. As a band leader, lead vocalist, bassist, guitarist, drummer and sound engineer, Russ has been with his “set” band at the company for the past 17 years, performing for many high-end clients, including at the wedding of New York radio Z100’s DJ Carolina Bermudez.

As a songwriter Russ has shared the concert stage and Billboard Music charts with the likes of: Fleetwood Mac, Maroon 5, Train and many others. Dozens of his songs and music videos have aired on domestic and international TV shows and TV commercials including This Is Us, The Young and the Restless, One Life to Live, All My Children, the CBS Winter Olympics and VH1 to name a few.

To See Videos on the Russ Bennett Band, Schedule an Appointment Today!

"We had the Russ Bennett band perform at our wedding on 8/27/22 and we couldn’t be happier. They played everything we wanted (80s, 90s, 2000s today) music and kept our dance floor full all night long. Russ also personally came up to us throughout the night to check on things and ensure they were meeting our needs and staying on schedule. Multiple guests complimented us on the band saying it was the best wedding band they’ve seen. On top of that, our venue unfortunately went on fire 48 hours before the wedding and the band stayed flexible with us during this time period. Would definitely recommend them for your wedding"

"We Cannot Say Enought Spectacular Things About This Band"

Words cannot describe the energy, the talent, and the outstanding performance of the Russ Bennett Band (Hank Lane) at our wedding on 7/23/22. Russ was personable and helpful during the entire process and even more during the wedding. Countless friends and family members are still raving about the musicians, music selections, crowd interactions, and the overall talent. The dance floor was rocking from the first song to the last song. We cannot say enough spectacular things about this band. If you are looking for your wedding music to be top notch look no further than the Russ Bennett Band!

Russ Bennett Band Review: "You Will Not Be Disssapointed!"

We booked the Russ Bennett Band for our wedding and they were fantastic! They played everything from Bon Jovi to Justin Timberlake and kept everyone on the dance floor. If you are looking for a band that not only sounds amazing but also has incredible talent make sure you book the Russ Bennett Band, you will not be disappointed!

As posted on The Knot.com

Working with Hank Lane Music these past 1.5 years was awesome! They were helpful when we were choosing the band, responsive to our questions, and able to accommodate our wedding postponement due to the pandemic! All of our wedding guests said how awesome the band was the whole night! They were so lively and kept everyone engaged. They read the crowd for what songs to play. We had the Russ Bennett Band and the other bands we were considering looked awesome too! I highly recommend selecting Hank Lane Music for your next party!

As posted on The Knot.com

“We used Russ Bennett Band for our wedding on June 11th and it was one of the best wedding decisions we made for vendors. We went with Hank Lane after one of our friends used the company for their wedding and we loved the energy and style. After meeting with Russ we quickly saw that they would be a good match for our love for a variety of music types. It’s a pretty hands off process to set up your songs, announcements, etc. For someone like me who is extremely detail oriented, organized, and needs to be in control I was a bit nervous with the small amount of contact and easy online form method to set up your big day. But, it truly was that simple and they delivered! We are still getting compliments about our band and how spectacular they were. I would highly recommend Russ Bennett Band to anyone who asks!”

The Knot.com Review of The Russ Bennett Band: "AMAZING!!!!"

The Russ Bennet Band is AMAZING!!!! We met Russ at our first meeting at Hank Lane and were totally sold after seeing a few of his bands performances from other weddings. He seemed to know exactly what we were looking for and what our style was. We never worried leading up to our wedding day about anything with the band. Every song they played was perfect for what we wanted and they had everyone up on the dance floor all night. All of our family and friends could not get over how fantastic they were and everyone asked us if they perform anywhere that isn't a wedding so they could go and see them again! We would definitely recommend them to anyone who is looking for a phenomenal wedding band!!

Russ Bennett Band Review on The Knot: "Couldn't have been happier!" 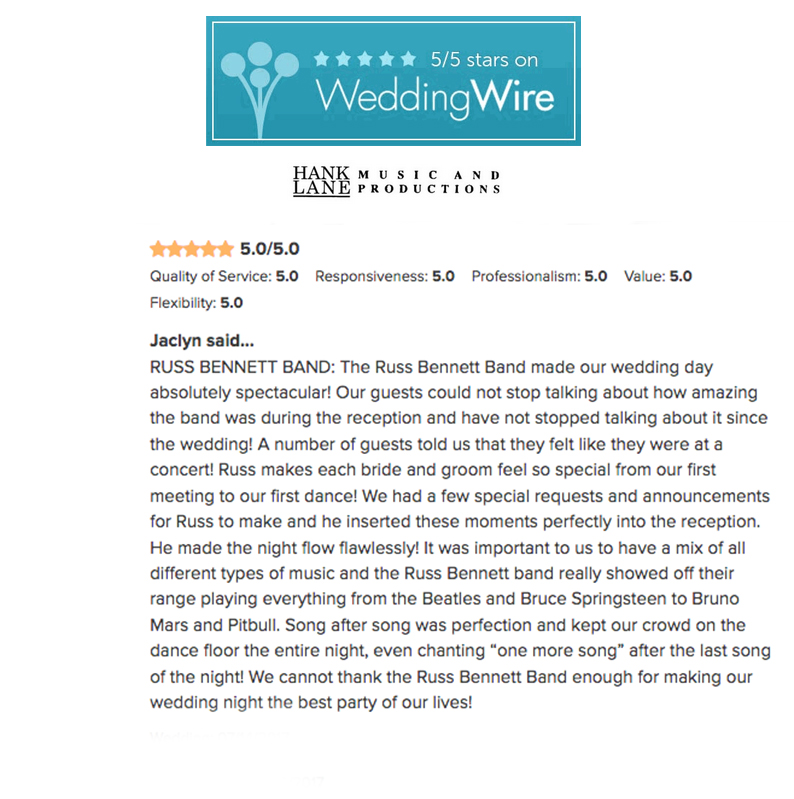 "The Russ Bennett Band made our wedding day absolutely spectacular! Our guests could not stop talking about how amazing the band was during the reception and have not stopped talking about it since the wedding! A number of guests told us that they felt like they were at a concert! Russ makes each bride and groom feel so special from our first meeting to our first dance!" 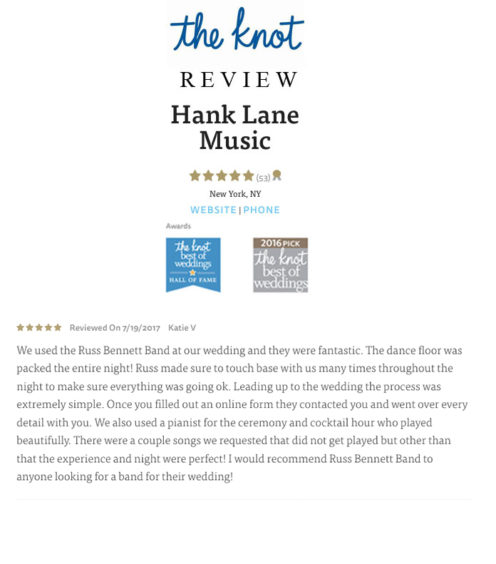 "We used the Russ Bennett Band at our wedding and they were fantastic. The dance floor was packed the entire night! Russ made sure to touch base with us many times throughout the night to make sure everything was going ok. Leading upto the wedding the process was extremely simple... I would recommend Russ Bennett Band to anyone looking for a band for their wedding!" 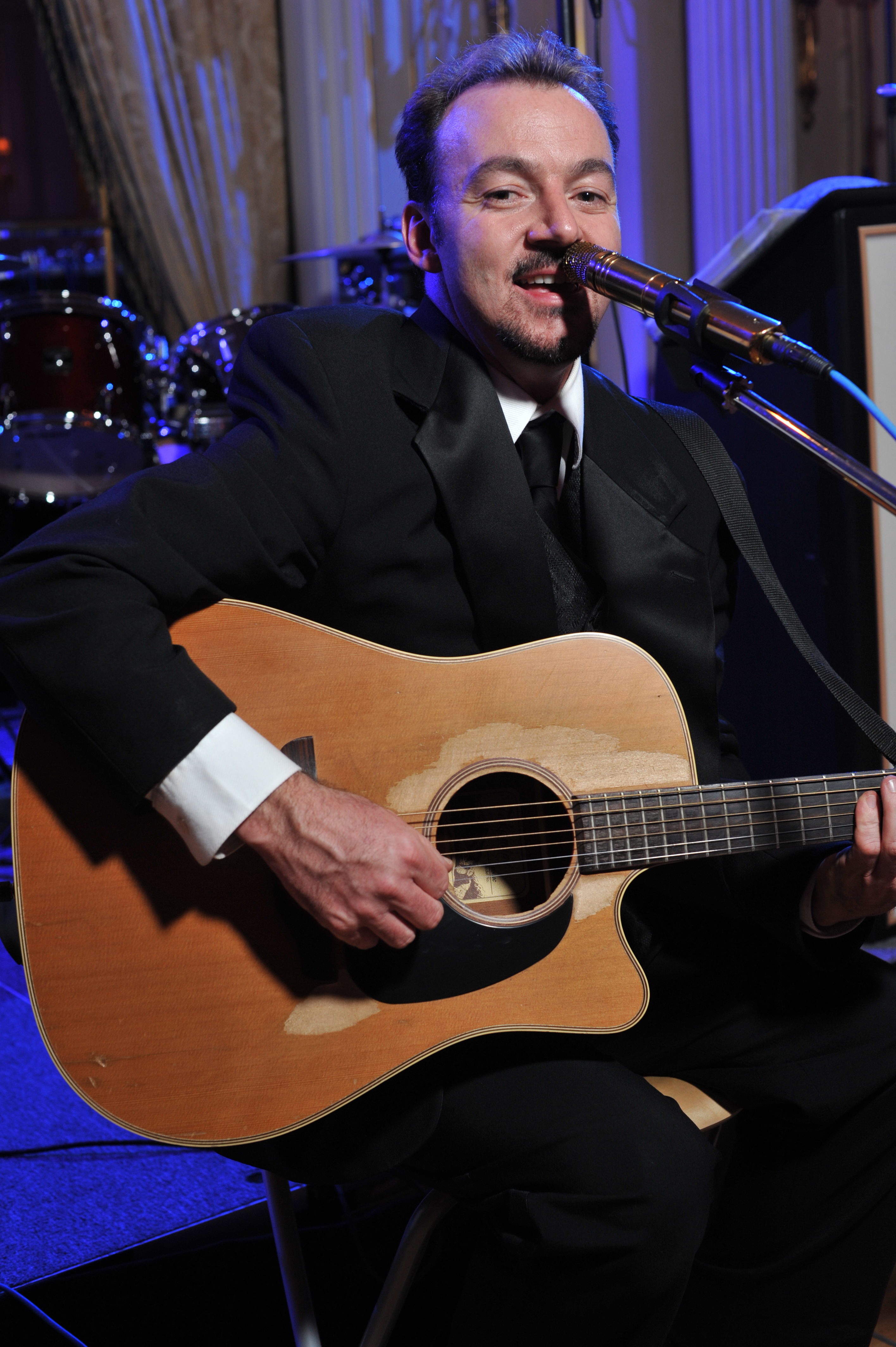 THE BEST WEDDING EVER!! Hi Russ, Thank you so much for an amazing night! Our guests cannot stop raving about how amazing our band was. So much so that a handful of people have asked me to send them the playlist from that night. I assume you don't really keep record of all the songs that were played throughout the night, but I figured I would check with you. Also, one of our friends getting married in Maryland next July are looking for a band and they wanted to know if you travel to Maryland to perform? When I can back down to reality I will be sending another email with a glowing review and the knot, wedding wire, etc Thank you again for everything! Jaclyn

We will definitely be writing a positive review sometime soon! Thank you again for keeping the dance floor full, and the party rocking! All the best, Landon and Meaghan 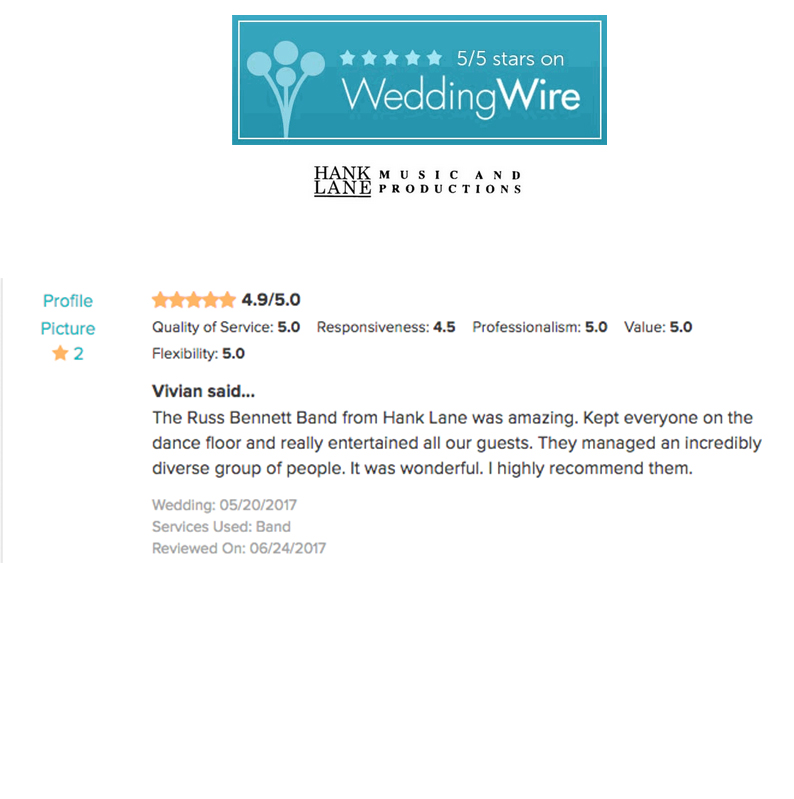 "The Russ Bennett Band from Hank Lane was amazing. Kept everyone on the dance floor and really entertained all our guests. They managed an incredibly diverse group of people. It was wonderful. I highly recommend them."