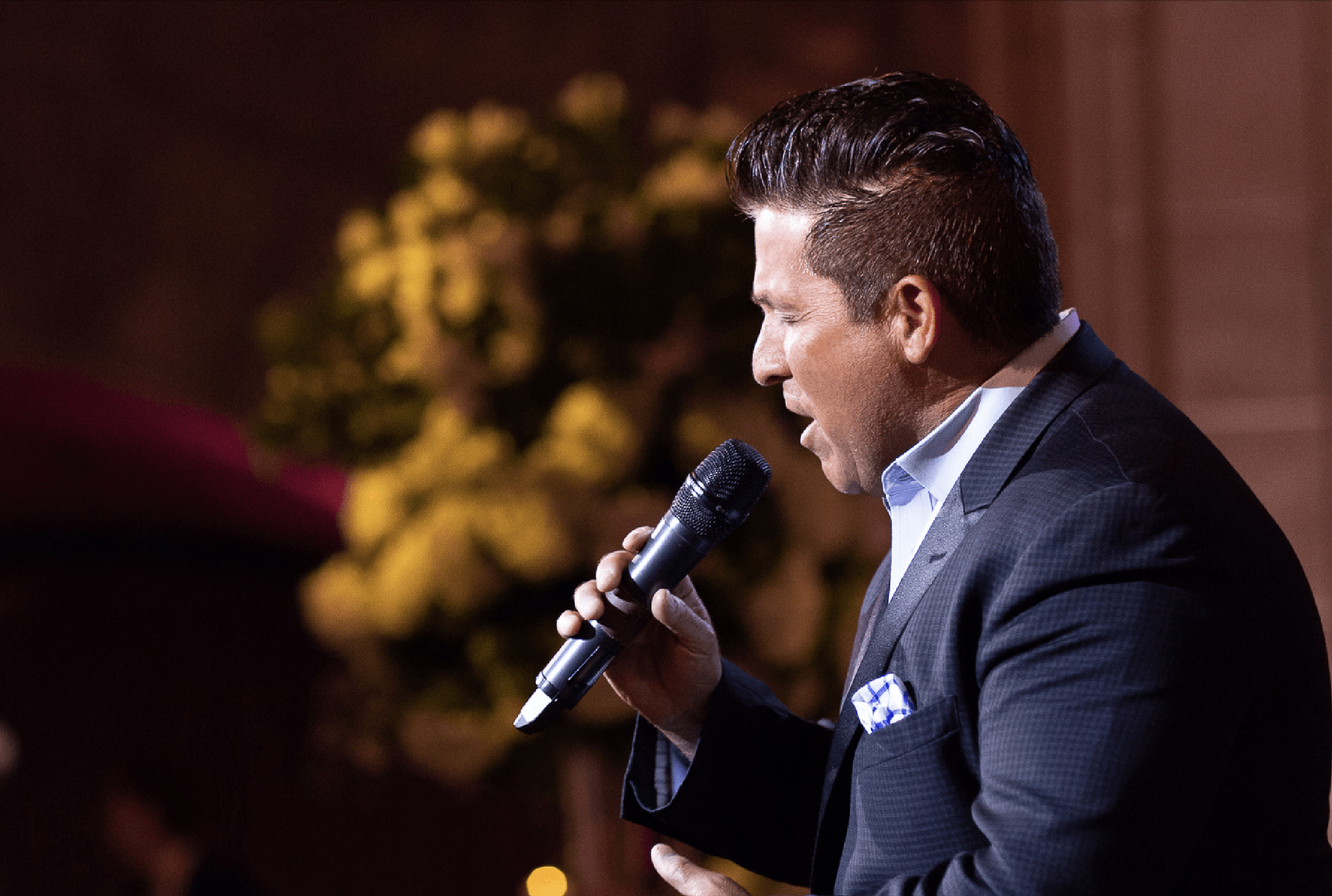 Performing is what Steve has become known for in his more than 15 years as a band leader and lead singer for Hank Lane Music. With a voice that can easily range from Frank Sinatra to Journey's Steve Perry to the great Andrea Bocelli, Steve began to receive early recognition as an outstanding singer while a student at Pace University, where he ultimately received a degree in Finance. In 1979, he was voted Best Male Vocalist in the Summer School of the Arts competition among more than 3,000 contestants from around New York State. However, Steve really burst on the scene nationally, and was the most-voted-for performer in 1986 on TV's original Star Search. The next year he recorded a national commercial for Mothers Against Drunk Driving (MADD).

Steve has appeared on NBC’s Today Show on the popular morning program’s Today Throws A Wedding segment; has appeared several times on the We Channel’s My Fair Wedding with David Tutera for celebrity wedding planner David Tutera and sang the traditional wedding first dance at Ivanka Trump’s wedding. He has also performed with stars such as Whitney Houston in Atlantic City, NJ. Steve and his band can frequently be seen at dozens of charitable galas and corporate events each year.

To See Videos on the Steve Delisi Band, Schedule an Appointment Today!

Heather and I are currently on our honeymoon in Italy but I absolutely had to reach out to thank you, Steve and the entire band for an absolutely amazing evening!

Based on everything we had seen and heard of the band, we knew they would be phenomenal, but they exceeded all (very high) expectations.

Their sound, their voices, their energy, their song choice, their interactions with the guests, everything was outstanding. Steve even came over to us during the evening to make sure we were having a great time (which of course we were). The guests did not stop dancing all night long as we had hoped!

We got so many complements that this was the best wedding band people had ever heard and we have to agree.

We’ve already given the band’s name and Hank Lane contact info to several people who are in the process of planning weddings. As Heather and I told you on our call, we value music for a wedding right there at the very top of the list of importance and it the band really delivered.

Please pass along our deepest thanks to Steve and the band for everything on Sunday.

Best decision we made during the planning process was choosing the Steve Delisi Band for our wedding.

We knew Steve was going to rock the house, but what we experienced went way beyond that. So many of our guests told us they couldn’t believe this was a band at a wedding, they felt like they were literally at a concert. The dance floor was packed the entire night.

My husband and I took a moment to ourselves during the middle of the party to observe the dance floor and everyone at this point was facing the stage in awe of what they were seeing. We also loved our ceremony music and cocktail hour music provided by Steve and additional band members.

Steve Delisi and Hank Lane, we had the BEST NIGHT EVER and can’t thank you enough!!!!

Steve Delisi took an already sensational wedding to a whole new level of greatness!! His fantastic voice and song choice brought all ages together, dancing and singing every word!! The Steve Delisi Band was sensational, every single song was a winner, and a crowd pleaser!! I am blessed with amazing friends and family who ALL have a tremendous feel for partying and great music and they were truly all blown away …dare I say… Steve Delisi was worth every penny and I truly thank him from the bottom of my heart!!!!!!!

All my love and thanks,

Steve Delisi Band was phenomenal! Steve had a great voice and his male and female vocalists killed it. Our whole crowd told us the band was perfect! So happy we used Hank Lane!

The Steve Delisi Band was superb! Steve had a great voice and great vocal range. The female and male vocalists sang their hearts out. Sooooo happy with the band and everyone at our wedding agreed.

We booked the Steve Delisi Band from Hank Lane for our wedding in September. All I have to say is WOW. Steve and his band far exceeded all of our expectations. Everyone at the wedding couldn't stop talking about how amazing his whole team was and how they didn't want them to stop playing. If you are going to have a band at your wedding it needs to be Steve's and it needs to be through Hank Lane!

We booked The Steve Delisi Band for our wedding this July and we could not be happier with the choice we made. Start to finish, the team at Hank Lane showed the outmost professionalism and gave great recommendations about the number of band members we should hire.

It is a month later and our guests are still raving about the Steve Delisi Band and that is always the first compliment we get- "That Band though!!!" Everyone was on their feet all night and there was something for all, which is a true testament to how versatile Steve and his band really are. His collaboration with another singer we hired was seamless, as well as his other band members who did vocals. Steve performed all of the songs we loved and his voice was fantastic. Stefano also rocked all of the Italian music, and all of our Italian guests truly enjoyed it. The music did not stop for a second-no breaks! We highly recommend Hank Lane and The Steve Delisi Band!! 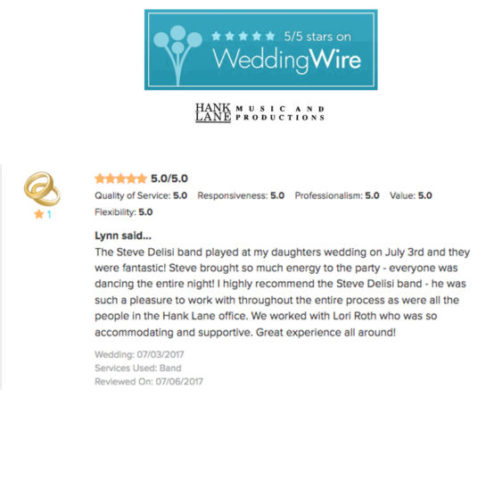 "The Steve Delisi band played at my daughters wedding on July 3rd and they were fantastic! Steve brought so much energy to the party - everyone was dancing the entire night! I highly recommend the Steve Delisi band - he was such a pleasure to work with throughout the entire process as were all the people in the Hank Lane office. We worked with Lori Roth who was so accomodating and supportive. Great experience all around!" 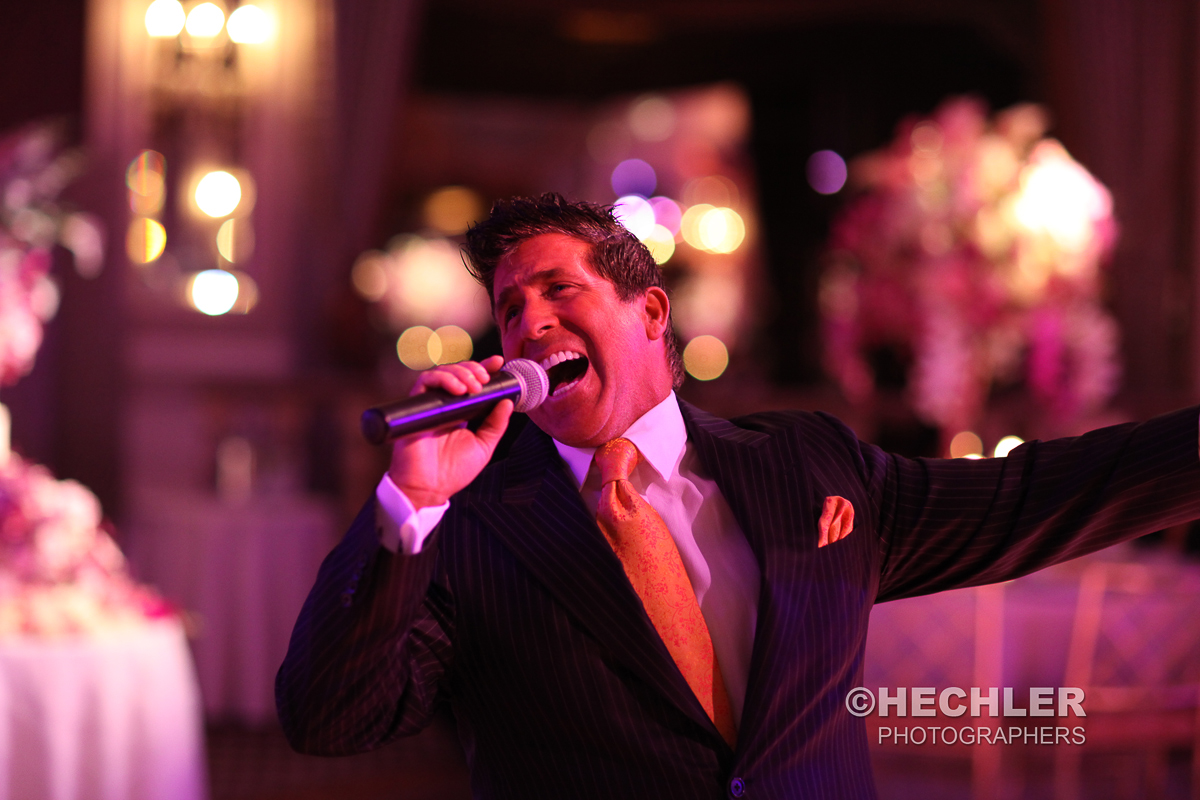 Mike – I wanted you to know that Patrice and I (and our daughter Andrea and son-in-law Mark) thought the music on Saturday night was outstanding.  Steve and his vocalists and band members were simply amazing. The range of music sung ( all as requested by my daughter and son-in-law) was incredible and to tell you the truth, their vocal skills were so fantastic that it would have been next to impossible to know that the actual artist wasn’t singing the music. The energy on the band stand and on the floor from Steve and his vocalists was electric. The dance floor was packed all evening and literally everyone at our party could not stop raving about Steve and the band. I got so many “best band I ever heard” comments that night from a crowd that has gone to many, many weddings. I think as I had mentioned to you in an earlier email, Patrice and I had seen Steve about three years ago when he performed at Gotham Hall for Eric Foster (he is the son of dear friends of ours). We were so impressed that night that when we went with Andrea and Mark to your Hicksville office to review all of the bands available, we were hoping that Andrea and Mark would select Steve. Not surprisingly they really liked Steve and his sound, so they went with him. They were beyond happy that they did. I don’t know if Steve has a hank lane email address, so although I am copying him on this email using the same syntax that I think you guys use, I would ask that you share this with Steve.  We were so happy Saturday night and everything that Steve and his band did – from the wedding ceremony to the cocktail reception to the absolutely amazing 4 hours of music in the ballroom, we were dancing on air!! All the best Patrice & Dan

Erik and his band made me a hero. Delisi came through with such a great surprise, adding Rock of Ages star to the finale. Fusion killed it with the lighting. The sound was awesome. The atmosphere was beyond the best most people at this event had ever seen. Erik's energy is infectious. Each band mate is more talented than next. Compliments come from the old and the young. Total class and perfection. Hank Lane, Steve Delisi, Erik Marshall and the entire operation stand alone at the top of delivering premier quality entertainment. Period end of report. What a pleasure and great feeling it is for me to have given them as a gift to all 250 of my guests. There wasn't a person who didn't come up to me and ask "how did you get this band?" "They are better than the actual artists who originated the songs". The smiles on their faces all night long was because they had the band of their lifetime and they knew it and they weren't going to do anything but take full advantage of it.

He is now in Stevie D's category..part of the family!

Steve, I only have this email and finally catching up!! You and your band were amazing. In the words of guests "epic". What a fun night and thank you SOO much for being a part of our night!  We are truly blessed to know such talented people!   Love Shalini & Brian

Hi Ian - just wanted to let you know in the 12 years - since first told us and sold us on Steve Delisi for my daughter's wedding - he gets better and better! He stays current, relevant, has more energy and sounds better than ever before and he and the band made Friday evening's Gala spectacular. No one works harder and has more heart and soul than Steve! Please thank him for me. Best, Lois